Her costars were shocked by the revelation — with Danielle Fishel swearing “on the lives of my children” it never happened.

“Boy Meets World” star Trina McGee was the only series regular who didn’t appear in the series finale — and, appearing on a podcast with some of her former costars, she explained why she’s been carrying around pain from that decision for more than 20 years.

McGee played Angela Moore, girlfriend of Rider Strong’s Shawn Hunter, on the ABC sitcom. In an interview alongside Strong, Danielle Fishel and Will Friedle for their Pod Meets World podcast, she said she had been told they specifically asked to have her cut from the final episode of the series back in 2000.

“This is some ground we have not covered. I was told, in kind of a weird, off-handed way by a very important person, that you guys all went to [showrunner] Michael Jacobs, and you said, ‘We don’t want her in the last episode. She’s somehow taking our light.’ [That] was the gist of it,” she told them, eliciting shocked reactions from the three costars. 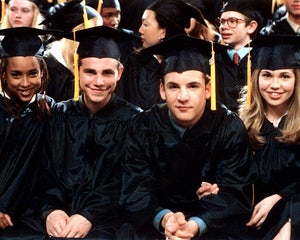 “Because I know the last show was going to be the one with the ratings and the crying and all the stuff. I was under the impression y’all got together and did not want me in the last show, for some reason I was going to take some shine or something to that effect,” she continued. “That was really hurtful to me for a long time.”

McGee said her family members even wondered why she was left out, which made her realize how “strange” it truly was. “I have honestly had that in my head for 20 years,” she added. 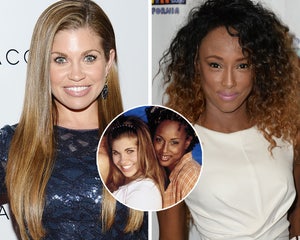 “Can we say for the record, Trina, that never happened,” said Friedle. “I swear on the lives of my children,” added Fishel, before Will said he swore on both his marriage and wife. “This pisses me off, I’m sorry, this is next level crazy,” he exclaimed.

“I believe you. I can tell by your reactions,” McGee responded. “I have had that in my head for so long, and I’ve never watched that show. I’ve always felt like, ugh. That hurt me a long time.”

Both Fishel and McGee also recalled being pitted against each other and feeling coldness from one another back in the day — adding that they have hashed things out as they shared their own experiences with each other in the years since. “What a shame we weren’t able to talk about this from the beginning. We could have helped each other,” added Fishel. 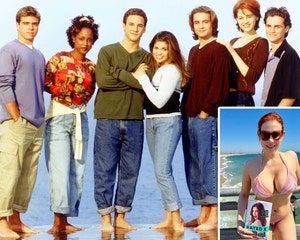 While Shawn and Angela were an interracial couple on the show, it’s something which was never actually addressed in the script — something else McGee took issue with, but kept quiet about to keep her job. She said she even wrote an op-ed for the New York Daily News at the time defending the fact the show didn’t mention the interracial aspect of the relationship — but added the piece was actually written by a publicist and her then-husband.

“I didn’t want to take it on and it wasn’t totally my organic view. Funny enough, a rebuttal was written to the Daily News by Lorraine Toussaint, who said, ‘No, you must acknowledge that these are two different races getting together. It’s very serious,'” she recalled. “I read what she said and I actually kind of agreed with her.”

“If I had to do it over and I could take my real stance of hindsight and everything, I would have wrote the opposite article,” she added. “I would have pushed more for us to have more jokes about the differences or an episode where you come to my house and the food is different.”

To her costars, she later added, “There are so many things you guys are so lucky you didn’t have to think about.” 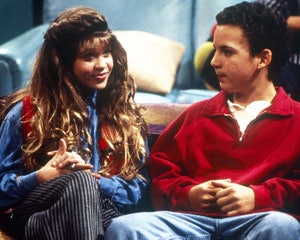