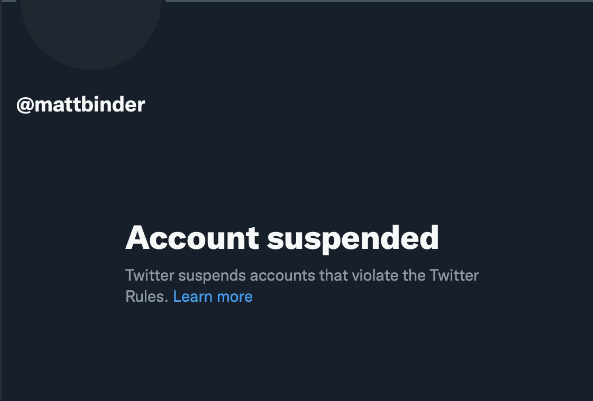 Twitter Inc. today caused yet another controversy when several high-profile journalists said their accounts have been suspended.

It’s not certain as yet why those accounts have gone down, although the connection between them was that they had each covered Twitter’s new owner, the “free speech absolutist” Elon Musk. The daily development comes just a day after Twitter took down accounts that track the movement of private jets, one of them belonging to Musk.

A list has been compiled regarding which journalists have been booted from Twitter. It includes The New York Times’ Ryan Mac, The Washington Post’s Drew Harwell, The Intercept’s Micha Lee, CNN’s Donie O’Sullivan, Mashable’s Matt Binder, plus independent journalists Aaron Rupar, Tony Webster and Keith Olbermann. None of them knows why their Twitter lights went out, but it seems certain it has something to do with their writing about Musk.

“I never posted anything Elon Jet-related or that could violate the policy about disclosing locations,” Aaron Rupar told CNN. “Unless the policy is that you criticize Elon, and you get banned.” He said Twitter hadn’t explained what it was all about, saying only that the ban is permanent.

One theory is that it has something to do with the social network Mastodon, at least for some of the bans. Its Twitter account was also suspended, more than likely because it published the jet-tracking information that Musk had banned on Twitter. Some of the journalists who have just been culled were telling their Twitter followers about the fact they could still track Musk on Mastodon.

Lee admitted that before his account was banned, he had tried to post a link on Twitter to the Mastodon account @ElonJet. When that failed, he tried to post a screenshot of the link — admittedly not very wise. Musk might be sore about this since he says a car carrying his son to school was followed by a stalker the other day. Twitter now has the policy to ban live tracking of people, which is reasonable and, for the sake of safety, should have always been a matter of doxing – which is not allowed on Twitter.

Still, Rupar thinks he was banned for nothing more than writing a critical article about Musk on Substack called “Elon Musk’s reactionary populism.” It didn’t say anything about Musk’s whereabouts or leave links to discover that, although it was very critical and branded Musk guilty by his association with people such as Dave Chappelle and Ye.

“Musk is bloated with privilege and power,” said the article. “He’s every asshole who’s every fired you. He’s the guy who spends $500 on a bottle of wine while you can’t afford groceries. What about that is supposed to be appealing to the public at large?”

If that’s why Musk has banned the author from Twitter, his alleged ambition to make Twitter a center of free speech is certainly on shaky ground right now, although Twitter hasn’t yet weighed in on the suspensions. Musk’s actions aren’t a good look without any transparency, which has rankled much of the press.

“I volunteer to write the next chapter of THE TWITTER FILES on how the decision was made to deactivate the accounts of a bunch of journalists that reported on Musk, wrote the Journalist Judd Legum. “Just send me all the internal communications.”

Jason Kint, chief executive of Digital Content Next, warned, “I don’t know what happened here, but if @elonmusk doesn’t fix this within the hour with an explanation by morning, I’ll be on Capitol Hill tomorrow demanding that he be hauled in front of Congress.”