Porsche is readying a high-performance variant of its electric saloon, the Porsche Taycan, featuring aerodynamic upgrades and adapted bodywork.

A prototype was spotted testing on track in Germany with a significantly lower profile than any Taycan on sale today, a large rear spoiler, a modified front bumper and slightly adjusted side sills.

It was driven by Lars Kern, a Porsche factory driver, and fitted with a roll cage and a racing seat, although other interior details were well hidden.

The changes indicate this variant of Taycan will benefit from boosted aerodynamics and downforce, hinting at ramped-up performance.

It would improve on the 751bhp already available from the Taycan Turbo S Sport Turismo, which can race from 0-62mph in 2.8sec and on to a top speed of 162mph.

Porsche didn’t comment on the prototype, but should the Taycan receive a performance upgrade as part of the update, it would put it within touching distance of the 1005bhp Tesla Model S Plaid. 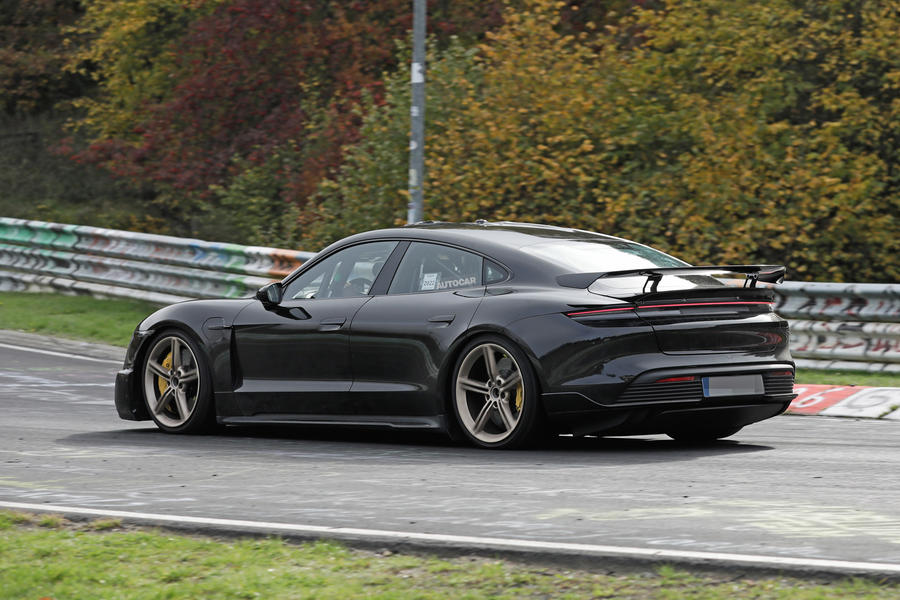 It would also give Porsche a chance at beating its own lap record at the Nürburgring for production cars, set by the Taycan earlier this year.

Fitted with a performance package available only in Germany, the Taycan rounded the 12.9-mile circuit in 7min 33sec, beating the Model S Plaid by two seconds.

Available through Porsche Tequipment, the package includes RS Spyder-design 21in wheels with Pirelli P Zero Corsa tyres and a significant update to the Taycan’s chassis-control system.