One of the women “fought back” as he allegedly left a string of stolen and crashed cars in his wake.

A 20-year-old man went on a dangerous carjacking spree, following an incident at Salt Lake City Airport over a “flight cancelation,” say police.

According to the Salt Lake City Police Department, John Joseph Thomas Green carjacked two people, attempted two others and crashed into a string of other vehicles before he was taken into custody on Friday, November 4.

Per authorities, the investigation began around 5am that day, after the Airport Division received information about a traveler who was upset “with airline employees because he could not purchase a same-day ticket to Denver, Colorado.” Police said he also “caused a disruption at the airport over a flight cancelation.”

Before officers could respond, however, Green allegedly forced a driver out of an SUV in the passenger pick-up area and stole the vehicle. Police say he then crashed it into a small car, before doing a U-turn and slamming into another vehicle, a BMW SUV.

With the assistance of our Airport Division, @UTHighwayPatrol, South SL Police, Summit Co. Sheriff, we are investigating an incident involving multiple carjackings. Media staging is at the Flying J rest stop near 900 West 2100 South. A PIO is on scene. #slc #slcpd #saltlakecity pic.twitter.com/47lqaab6PF

Authorities accuse him of then trying to force the woman out of the SUV from her car, but “her seatbelt kept her in the car and she fought back.” Neither the woman nor the driver of the other car were injured.

Green then allegedly drove off in the same SUV from the airport, before crashing into another car and hitting a building. Police say he then carjacked a Dodge Durango and hit five vehicles on I-80 — before authorities found Green “throwing rocks at passing cars” trying to get them to stop and “actively trying to carjack a fourth car.” The driver of that fourth car, however, took the keys from the ignition and police pulled Green from the truck and into custody.

After being taken to the hospital, he was booked into Summit County Jail on multiple felony charges — including aggravated robbery, receive or transfer stolen vehicle, DUI, reckless driving, assault and threats of violence, per Summit County Sheriff’s Office — and is being held without bail.

According to the probable cause statement (via KSL), Green reportedly told deputies “he was under the influence of PCP, cocaine and methamphetamines” at the time of his arrest. 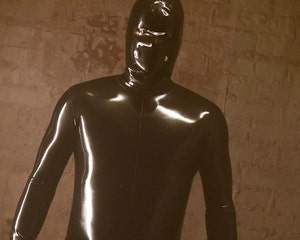 File Photo of the Rubber Man from American Horror Story