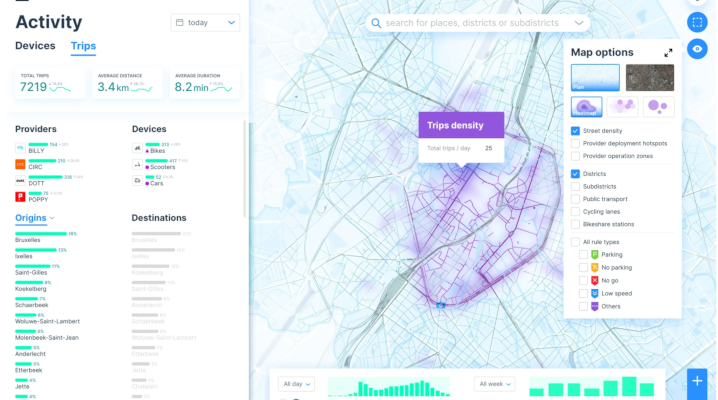 Vianova SAS, the developer of a specialized data analytics platform for shared mobility providers and municipalities, has raised $6.4 million in funding.

The Series A investment was led by the venture capital arm of insurer Baloise Holding AG, TechCrunch reported today. XAnge, RATP Capital Innovation and Ponooc participated as well. Vianova has raised a total of $9.3 million from investors since launching in 2019.

Paris-based Vianova provides a software platform that enables shared mobility providers such as ride-hailing startups to monitor their vehicle fleets. The startup’s platform visualizes the location of each car in a company’s fleet on a map. Vianova can also track other types of vehicles, such as electric bikes and scooters.

The startup’s platform enables companies to identify vehicles that may be parked in violation of city regulations and move them to a new location. Vianova also promises to ease the task of measuring customer demand. Using the startup’s platform, a ride-hailing provider can track how many consumers use its vehicles in a given city.

Vianova says that shared mobility companies can use the data it collects to plan business expansion initiatives. The data lends itself to certain other tasks such as well, such as optimizing day-to-day fleet maintenance. A micromobility startup, for example, could analyze how its electric scooters are used to determine the frequency at which they should be recharged.

According to Vianova, its platform can also be used by municipalities to ensure shared mobility fleets comply with local regulations. Urban planning is another task that the startup promises to ease. Using the data provided by Vianova, municipalities can determine where new bicycle lanes and charging infrastructure should be built.

For users with advanced requirements, Vianova provides the option to combine the data in its platform with information from external sources. A built-in tool dubbed Data Exchange makes it possible to collect information from more than 150 sources. Organizations can aggregate road safety records, information about the delivery companies that operate in a city and other data points.

Vianova says that its platform tracks more than one  million vehicles for dozens of customers. The startup’s user base includes venture-backed startups such as food delivery provider Bolt Technology OÜ, as well as more than 60 municipalities worldwide.

Vianova will use the proceeds from its latest funding round to grow its international presence. As part of the effort, the startup intends to hire more employees as well as develop new features for its platform.