“flower on the left… he is spoken for ladies,” a fan wrote about Momoa, who is reportedly dating Eiza Gonzalez.

In the chance that Jason Momoa ever decides to quit acting one day, it looks like he’d have a great backup career as a flight attendant.

On Monday, a TikTok user shared a hilarious, yet heartwarming video that showed the “Aquaman” star showing off his skills as a flight attendant. As shown in the clip — which was posted by a woman named Kylee Yoshikawa, who goes by the username @livinglikekylee — Momoa can be seen pulling a drink cart down the aisle of a Hawaiian Airlines flight as he handed out bottles of water to passengers. 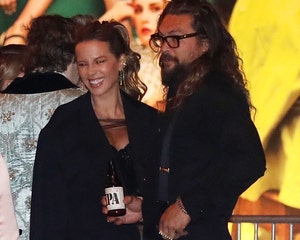 In the video, the 43-year-old Hawaii native was all smiles as he greeted passengers, who were likely shocked to see him on the flight. Momoa also looked very dapper, rocking a gray suit jacket with a black t-shirt underneath, and he accessorized the look with a lei and a pink flower behind his left ear.

In the post’s caption, Yoshikawa said her aunt captured the epic video and sent it to her. “My aunty sent me this vid, i just thought i’d share 😍✈️,” she wrote, adding the captions, “#PostitAffirmations #hawaiitiktok #jasonmomoa #flightattendantlife.”

Many fans took to the comments section to react to the video. While some TikTok users made hilarious jokes, others made some very interesting observations.

“Aguaman,” one user wrote, while another fan added, “Jason Mimosa.”

“IM NEVER SLEEPING THROUGH A FLIGHT AGAIN,” a person noted.

“In this situation, im gonna ask for another water,” another joked, to which Kylee quipped in reply, “i would drink gasoline if jason momoa told me to tbh.”

When another user asked if the actor only handed out water to people in first class, Kylee responded, “i believe he walked the whole plane!”

Meanwhile, some eagle-eyed fans pointed out some little details others may have missed. According to users, the aluminum water bottles Momoa handed out were from his brand, Mananalu.

In addition, the placement of the pink flower the “Dune” star wore has a hidden meaning. “flower on the left… he is spoken for ladies 😩,” wrote a fan. In Hawaiian culture, if you wear a flower behind your left ear, you are married, engaged, or simply unavailable. Momoa is reportedly dating actress Eiza Gonzalez.

And while it’s unclear when the video was shot, several fans also pointed out that Momoa seemed to be doing well after he was involved in a motorcycle accident late last month.

Check out the TikTok, above!