The upper-middle class’s go-to family car is rapidly becoming a plug-in hybrid mid-sized SUV, so it makes sense that Volvo – having cleverly branded itself as the sustainable car maker of choice – has revised its Volvo XC60 Recharge T6 plug-in hybrid to stay competitive.

The crux of the update is an improved powertrain that includes a new battery with capacity increased from 11.6kWh to 18.8kWh and a more powerful (145bhp) rear electric motor, resulting in a total output of 345bhp in the T6. Plus, crucially, electric-only range increases from 33 to 48 miles. One-pedal driving has come in, too.

An updated, more powerful T8 Recharge plug-in hybrid also sits in the range and delivers 449bhp, making it the most powerful car Volvo has yet produced. But this T6 will take the largest chunk of PHEV sales, which in turn take a large chunk of overall XC60 sales – 40% to be precise.

The challenge for eco-minded car manufacturers like Volvo is to exude a premium air without necessarily using those materials most of us associate with luxury. In the XC60, the trick is pulled off seamlessly, with a smart eco fabric that not once feels the poor relation to leather.

Elsewhere in the interior, a nice unfinished wood with genuine textures is paired with brushed metals and a large portrait-oriented touchscreen. Volvo’s tie-up with Google means Google Maps is accessible directly on the touchscreen and it works particularly brilliantly with voice control. 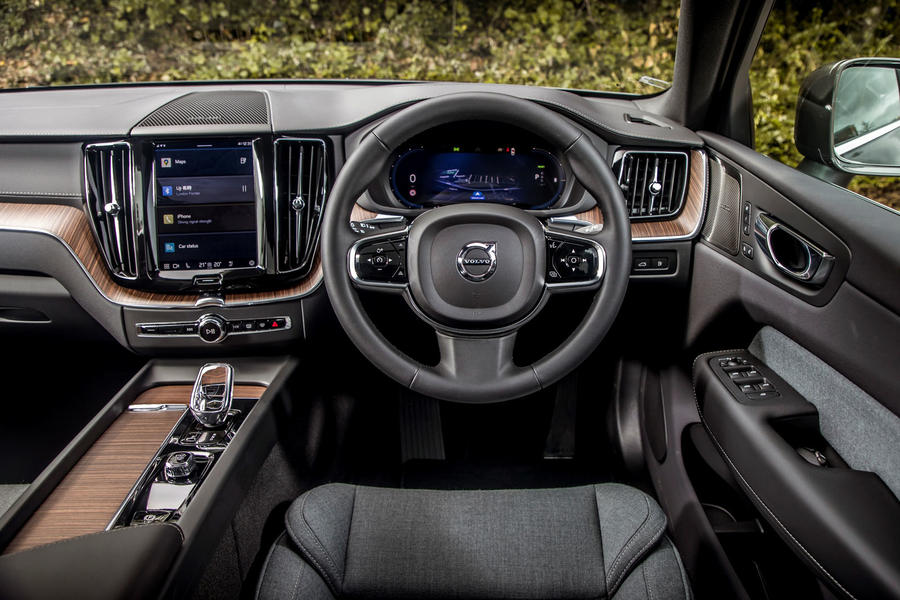 Space-wise, the XC60’s rear seats are less cramped than those of its Jaguar E-Pace rival, and it has a much larger boot, too.

During our test, the predicted electric range was a fair reflection of real usage. Plus, with the sat-nav set, the system accurately plans ahead to most efficiently use the remaining charge. It quite spookily matches the remaining range to the remaining miles to the destination, ensuring you arrive with the battery at 0 miles. The other benefit of a longer range is a reduction in the official CO2 emissions from 55 to 24g/km.

The switch from electric to petrol power is seamless and the engine is smooth at low revs. If you floor it, you will hear a slightly gruff combustion noise, be shoved forward by the instant torque of the electric motor and then carried through by the 2.0-litre petrol unit. The 0-62mph sprint takes 5.7sec – 0.2sec quicker than in the previous XC60 Recharge T6.