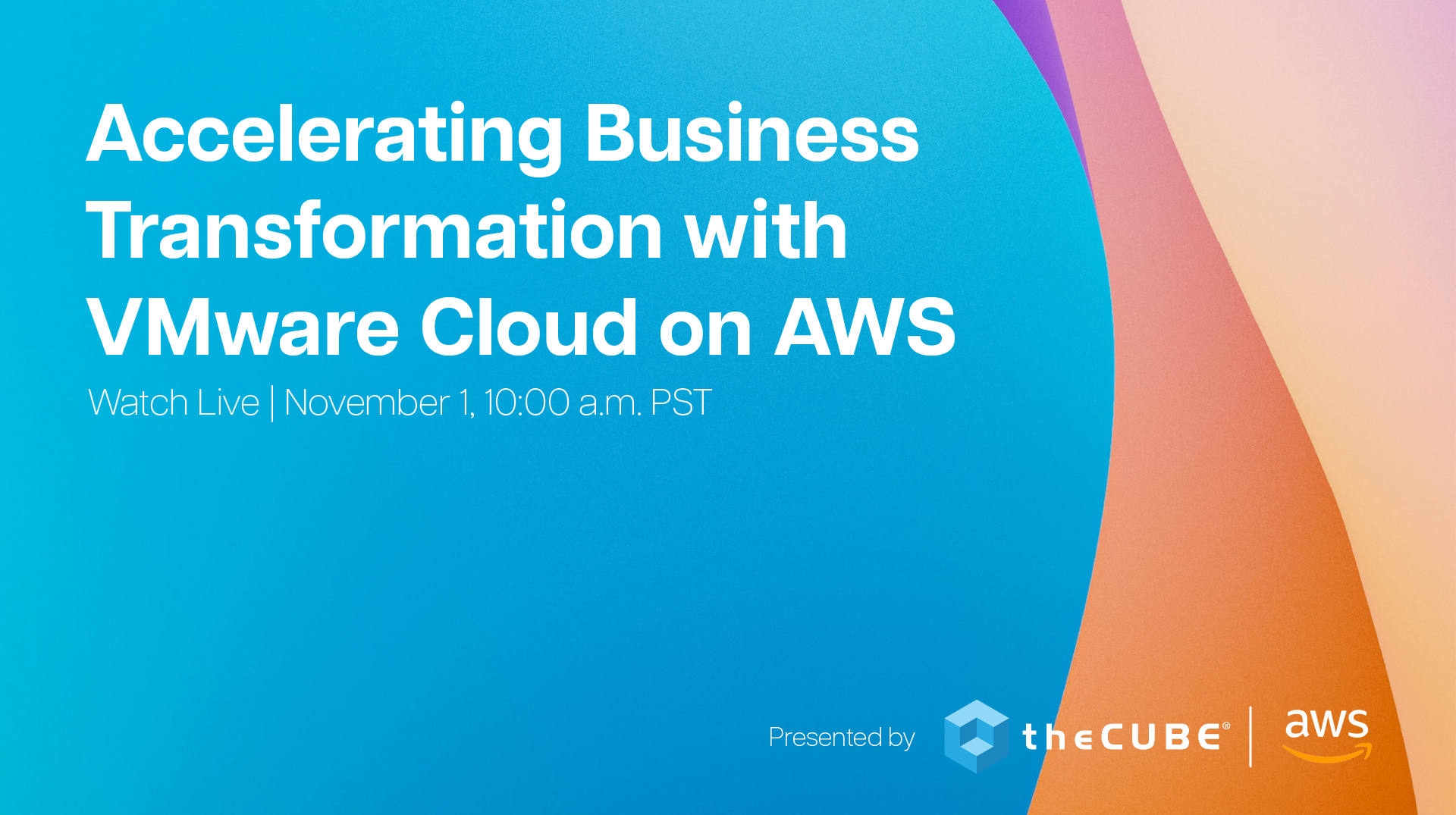 VMware Inc. and Amazon Web Services Inc. were once bitter rivals, competing for customers across the infrastructure-as-a-service, platform-as-a-service and software-as-a-Service markets. Previous VMware Chief Executive Officer Pat Gelsinger even went so far as to tell VMware partners in 2013, “If a workload goes to Amazon, you lose, and we have lost forever.”

Today, the two companies share a strong strategic partnership that continues to expand and evolve. The story of how AWS and VMware found common ground is spelled out in the back catalog of SiliconANGLE interviews, starting in 2016 when the companies announced their collaboration on a solution designed to meet the rising demand for hybrid cloud services: VMware Cloud on AWS.

“It’s an acknowledgment that VMware can no longer be enemies with AWS,” Al Sadowski, research vice president for infrastructure at 451 Group told SiliconANGLE at the time. “Every workload is not going to live on-premise.”

On Nov. 1, leaders from AWS and VMware will be joining theCUBE industry analysts to discuss the value of their strategic partnership in the “Accelerating Business Transformation with VMware Cloud on AWS” event. During the hour-long presentation, the companies will share customer success stories, demonstrate how the joint solutions created under the VMware on AWS umbrella enable a company to abstract the complexity of multicloud, and present some new innovations from the partnership. (* Disclosure below.)

AWS and VMware’s unlikely alliance marked changes in strategy for both companies. Just as VMware had been pushing back against the dominance of the hyperscalers, AWS had been determined not to move into the data center. But for their customers, the decision to move workloads to the cloud or remain on-premises wasn’t an either/or choice.

“They hated this binary decision that we were forcing on them,” then AWS Chief Executive Andy Jassy said on stage at VMworld 2017.

There were other factors at play for VMware, with parent company EMC Corp. being brought out by Dell Technologies Inc. According to Mathew Lodge, who was vice president of Cloud Services at VMware until 2015, the debt load acquired by Dell in the deal meant the death knell for VMware’s public cloud foray with vCloud Air.

“EMC now had a total lack of interest in spending billions on cloud service CapEx. The Dell deal was announced in October. It was at this point that VMware looked to expand its relationship with Google and start one with AWS,” he stated in an online comment.

As the impending acquisition by Broadcom Inc. once again hangs the sword of Damocles over VMware’s strategic future, the company’s profitable partnership with AWS could be a critical factor in Broadcom Chief Executive Officer Hock Tan’s decision process.

Partnership proves to be a win-win-win situation

In 2016, many analysts thought that the deal would be a “one-way ticket to AWS” for VMware customers. The reality has been far from that. At VMworld 2019, Mark Lohmeyer, senior vice president and general manager of the Cloud Platform Business Unit at VMware shared growth numbers with theCUBE analyst Dave Vellante.

In a 2021 breaking analysis column, Vellante commented that the VMware AWS partnership is “an excellent example of a legacy on-prem company leaning into the cloud and taking advantage of the massive capital spending buildout that AWS and the other big hyperscalers have ‘gifted’ to the industry.”

Sharing figures from ETR data, Vellante showed how the spending velocity for VMware on AWS has been consistently higher than VMware’s overall figures over the past 3 years.

“VMware is the leader in the enterprise and has 500,000 customers. Its deal with AWS has been a tremendous success,” he stated.

Moving to the current day, a July 2022 exploration of VMware’s spending profile showed VMware Cloud on AWS dominating the product portfolio with a spending momentum net score of 43.6%.

What Broadcom will decide to do with each of VMware’s product portfolios is still a matter of speculation, “but you can bet that the key decision point will be the product’s ability to throw off earnings before interest and taxes and/or its ability to help Broadcom deliver and reduce debt,” Vellante stated.

As hybrid and multicloud strategies become pervasive through enterprise, there is a growing need for solutions that can cross between cloud, on-premises and edge, simplifying the management of today’s complex distributed computing environments. With its ability to assist customers with cloud migration, data center extensions, building next-generation apps, and security and disaster recovery, the partnership between VMware and AWS is enabling both companies to build solutions for the next era of cloud on a strong and resilient foundation.

Don’t miss theCUBE’s coverage of the “Accelerating Business Transformation” event on Nov. 1. Plus, you can watch theCUBE’s event coverage on-demand after the live event.

We offer you various ways to watch theCUBE’s coverage of the “Accelerating Business Transformation” event, including theCUBE’s dedicated website and YouTube channel. You can also get all the coverage from this year’s events on SiliconANGLE.

(* Disclosure: TheCUBE is a paid media partner for the “Accelerating Business Transformation” event. Neither Amazon Web Services Inc., the sponsor for theCUBE’s event coverage, nor other sponsors have editorial control over content on theCUBE or SiliconANGLE.)