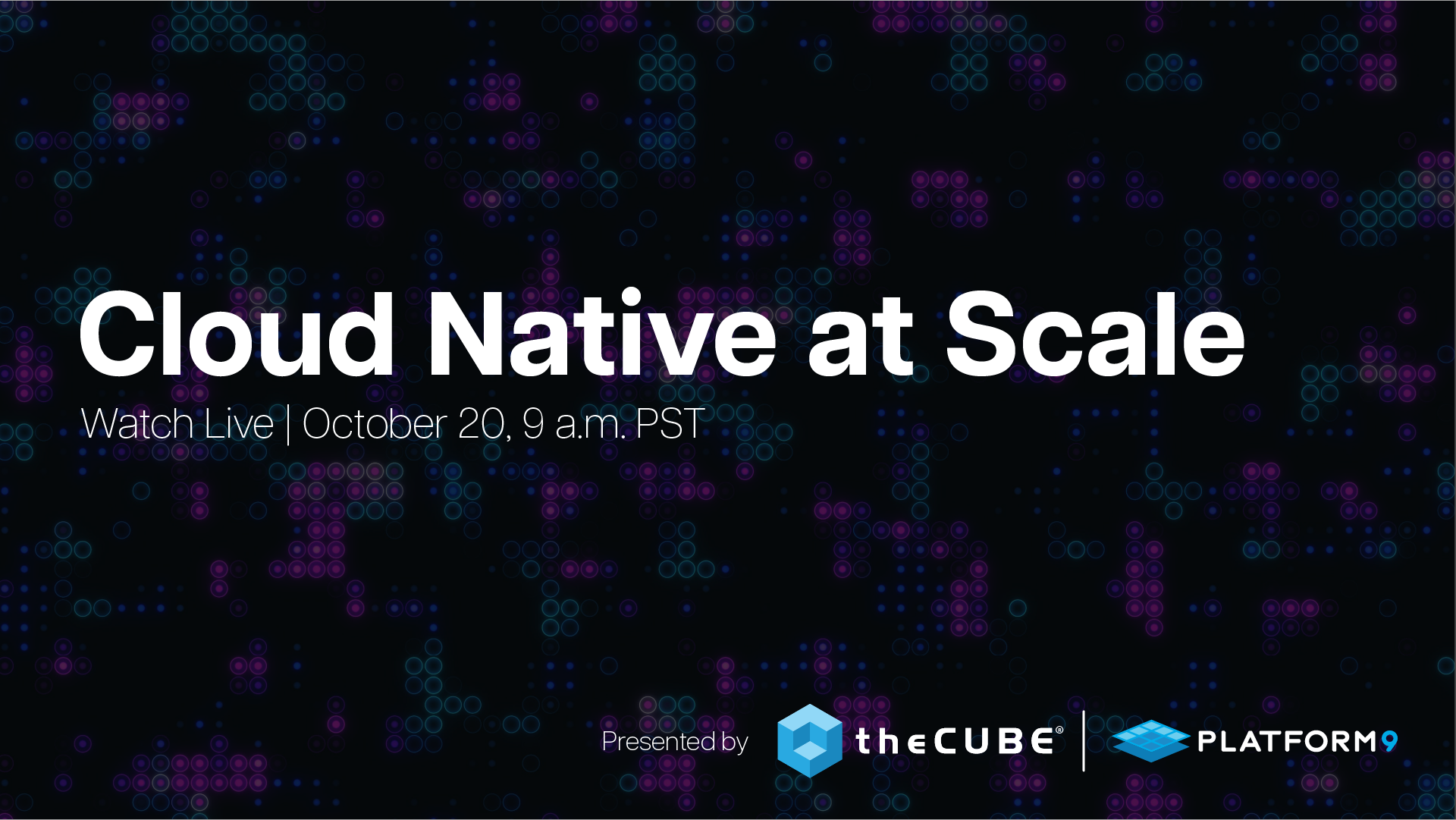 By eliminating the need for a physical server in public cloud, the cloud-native system continues to gain steam based on its software approach of developing, deploying and running modern applications using distributed cloud computing.

Nevertheless, cloud-native at scale is becoming a burning issue based on the fragmentation and complexity being witnessed. For instance, recent research by Platform9 Systems Inc. revealed that 91% of respondents cited operational complexity, observability, high availability, consistent management across environments and security as the leading issues for operating cloud-native technologies.

“So cloud-native at scale, something that we’re talking about because we’re seeing the next level of mainstream success of containers and Kubernetes; it’s changing the landscape of infrastructure as code; it’s accelerating the value proposition,” said John Furrier, theCUBE industry analyst. “And the supercloud, as we call it, has been getting a lot of traction because this next-generation cloud is looking a lot different, but kind of the same as the first generation.”

Join theCUBE, SiliconANGLE Media’s livestreaming studio, and Platform9 on Oct. 20 at 9 a.m. PST for the “Cloud Native at Scale” event. During the livestream, Furrier and Platform9 experts will delve deeper into how supercloud seeks to be a game-changer and the company’s new platform capabilities, which are meant to make it easier for cloud-native development and operations. (* Disclosure below.)

Based on the emergence of numerous micro sites, such as edge environment, on-prem infrastructure deployment and public cloud deployment, cloud-native at scale becomes more prudent. As a result, supercloud seeks to be instrumental when managing that scale.

“I think there needs to be a different term than just multicloud or cloud,” said Madhura Maskasky, co-founder and vice president of product at Platform9, who spoke to theCUBE in September. “The reason is because as cloud-native and cloud deployments have scaled, I think we’ve reached a point now where instead of having the traditional data center style model, where you have a few large distributions of infrastructure and workload at a few locations, you have a large number of micro sites.”

As cloud spending continues going through the roof, supercloud architectures are expected to proliferate because they seek to be an operating model that integrates edge, public cloud and on-prem networks. Therefore, enterprises are expected to embrace the supercloud trend based on the benefits accrued.

“You need a choice of infrastructure, but at the same time, you need a single platform for you to build your innovations on regardless of which cloud you’re doing it on,” said Bhaskar Gorti, chief executive officer of Platform9, who spoke to theCUBE in August. “So I think supercloud is actually a more tightly integrated, orchestrated management philosophy.”

Since cloud-native goes beyond lifting and shifting legacy applications, it seeks to take the driver’s seat in the supercloud concept, which encompasses different aspects like containerization, analytics, deployment, compute and storage.

“You can’t port to cloud-native,” Gorti pointed out. “You have to rewrite and redevelop your application and business logic using modern tools, hopefully more open source. And I think that’s what cloud-native is, and we are seeing a lot of our customers in that journey.”

Platform9 has kickstarted the supercloud concept with Arlon

Through its new Arlon open-source project, Platform9 seeks to fit into the supercloud picture. Arlon is an open-source tool that enhances the management and configuration of clusters and infrastructure at scale.

“Arlon is an open-source project, a Kubernetes-native tool for complete end-to-end management of not just your clusters, but all of the infrastructure that goes within and along the sites of those clusters, security policies, your middleware plugins and finally your applications,” Maskasky said. “Arlon uses Argo CD, which is probably one of the highest rated and used CD open-source tools that’s out there.”

Given that Platform9 enables enterprises to run Kubernetes and other cloud-native technologies within any environment of their choice through its distributed cloud service, it intends to be among the cloud acceleration-as-a-service pioneers.

“It can run on public, private … we have customers who do it in truly multicloud environments,” Gorti noted. “It runs on the edge and in stores. So we provide that, and also for specific segments where data sovereignty and data residency are key regulatory reasons. We also run on-prem as an air gap version.”

Since the sprawling cloud-native ecosystem generates chaos, managing them is of the essence. As a result, continuous deployment comes in handy.

“Adding more tooling that covers white space is great, but introducing abilities that let you better manage what you have today is probably absolutely top of the mind,” said Maskasky, who spoke to theCUBE in a session in September. “I think that CD or continuous deployment of applications is something that you want to get to; it’s that North Star, but most enterprises wouldn’t quite be there.”

Don’t miss theCUBE’s coverage of the “Cloud Native at Scale” event on Oct. 20. Plus, you can watch theCUBE’s event coverage on-demand after the live event.

We offer you various ways to watch theCUBE’s coverage of the “Cloud Native at Scale” event, including theCUBE’s dedicated website and YouTube channel. You can also get all the coverage from this year’s events on SiliconANGLE.

(* Disclosure: TheCUBE is a paid media partner for the “Cloud Native at Scale” event. Neither Platform9 Systems Inc., the sponsor of theCUBE’s event coverage, nor other sponsors have editorial control over content on theCUBE or SiliconANGLE.)