Dwayne “The Rock” Johnson’s “Black Adam” introduces a whole new crop of superheroes to the DC Extended Universe — but a trio of familiar faces from previous films also pop up throughout the movie.

It should be pretty clear we’re about to get into spoiler territory here — so if you haven’t seen the movie and want to go in blind, STOP READING NOW.

The first person who fans of these films will recognize is Viola Davis, who is once again back as Amanda Waller. Waller, of course, is the mastermind behind The Suicide Squad/Task Force X and Viola has played her in both “Suicide Squad” films and the “Peacemaker” TV series.

In “Black Adam,” she recruits the Justice Society of America (or JSA) to try and neutralize the titular superhero after he wakes up quite angry — and very destructive — following a nearly 5,000-year slumber. Hawkman (Aldis Hodge), Doctor Fate (Pierce Brosnan), Atom Smasher (Noah Centineo) and Cyclone (Quintessa Swindell) take her up on the challenge, setting up most of the action in the movie.

At one point in the film, Black Adam decides to give up his powers and is taken to an underwater Task Force X bunker — where we get out next cameo in the form of Emilia Harcourt, AKA “Peacemaker” star Jennifer Holland. She’s there to take in Johnson’s character, dampen his powers and basically keep him from breaking out. It, of course, doesn’t exactly work, and he’s released by Doctor Fate and flies back to Khandaq in time to save the city from Sabbac and his undead army.

While Adam acknowledges he and the JSA fought really well aside one another to take on Sabbac, he’s hesitant to make it a full time gig and decides to stay in Khandaq as its protector.

With that, the credits start to roll … and it’s time to address the Man of Steel in the room.

Yeah, #BlackAdam is going to cause some conversation. Experience it in theaters Friday 10/21. Get your tickets now: https://t.co/daugdlMCZD pic.twitter.com/ZERsgk3BMl

In a mid-credits sequence, Davis’ Waller once again pops up via hologram to talk to Adam, warning him to never step outside of the city or face her wrath. While he tells her, “No one in this world is powerful enough to stop me,” she hits right back — telling him, “I can call in a favor from people who aren’t of this world.”

As he tells her to go for it, it doesn’t take long for a very special Kryptonian to arrive. Yep, that’s right, Henry Cavill is back as Superman, in a move that really shouldn’t surprise anyone who’s been paying attention to Johnson’s pretty spoilery interviews leading up to the movie’s release. That being said, the audience in the opening night screening we attended went wild for the reveal.

“It’s been awhile since anyone’s made the world this nervous,” Cavill says, before stepping into the light and revealing his blue and red suit. The movie ends with him saying, “Black Adam, we should talk.” 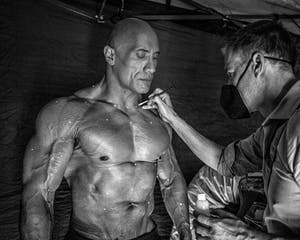 Cavill has been MIA from the DCEU since 2017’s “Justice League” and his place at DC has been a roller coaster ride since. It seemed he was basically done at the studio, which has plans to also develop another film revolving around a Black Superman, until Johnson fought to bring him back into the fold here. It’s worth noting that both The Rock and Cavill share the same manager, Johnson’s ex-wife and producing partner Dany Garcia and the scene was reportedly filmed at the very last minute sometime in September.

Looking ahead, producer Hiram Garcia told CinemaBlend the plan with Superman is “to craft a long-form of storytelling and show that these two characters exist in the same universe and are going to have to deal with each other often, either on the same or opposite sides.”

“Hopefully they’re going to clash at some point, but it’s not just about a ‘one fight’ situation,” he added. “That was never our dream. That does not reward the fans. Fans want to feel a journey between these guys knowing that these guys exist in the same universe.”

“Black Adam” is in theaters now. 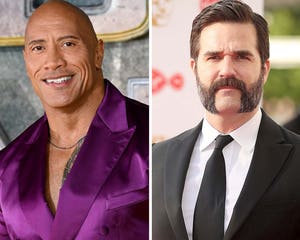