Amazon.com Inc. is showing off the power of its generative artificial intelligence models with a new service introduced today at its re:Invent conference in Las Vegas that makes it simple for parents to create compelling bedtime stories for their children.

The new Create with Alexa feature on Echo Show devices relies on sophisticated conversational and generative AI models to create animated bedtime stories featuring colorful graphics, background music and a compelling narrative. What’s more, children play a key role in the story’s creation, choosing from a series of prompts that inspires Amazon Alexa to create a unique story each time.

The way it works is extremely child-friendly. All they have to do to get started is say “Alexa, make a story” and follow a few prompts, and Alexa does the rest. It will generate a unique and original five-scene narrative each time that’s based on the child’s choices.

Each scene is composed of an illustration, narrative, background music and sound effects, with the child’s choice of character, setting and other variables dictating the direction it takes. According to Amazon, Create with Alexa’s generative AI models are so creative that no two stories will be the same.

“It’s an experience where Alexa becomes your child’s co-creator,” said Nico Bishop, a UX designer whose team builds the customer experience for Create with Alexa.

To get started, the child first selects a theme, which could be an “enchanted forest,” “space exploration” or “underwater.” Then, they choose and name the story’s central character, which could be an alien called Fuzzy or an astronaut named Speedy. Other choices include selecting a color theme and choosing from adjectives like “happy,” “silly” or “mysterious.”

With those few inputs, Alexa will then put its generative AI to work, creating an original five- to 10-line story with its own unique sounds and visual effects. Even if the child specifies the exact same details each time, Amazon promises it will still generate a unique story, so the experience will never be the same. However, children can still save their favorite stories to watch them again or share with friends.

In a blog post, Amazon explained that Create with Alexa is powered by an AI model that’s trained on human-written children’s stories to create the text of each new story. It works in concert with a scene-generation model that comes up with an appropriate illustration based on background images created by either humans or other AI models. Then, it adds in objects that fit the narrative, such as pirates, fish and seaweed if the child has chosen an underwater scene.

Additional AI models are used to orient gestures made by the characters in the story, such as hand waving, as well as facial expressions such as laughing or crying. Finally, Alexa uses an AI sound and music generator to produce background music and sound effects that fit the narrative, drawing on an extensive library of instrumental parts. An AI musical arrangement model makes sure everything fits together. 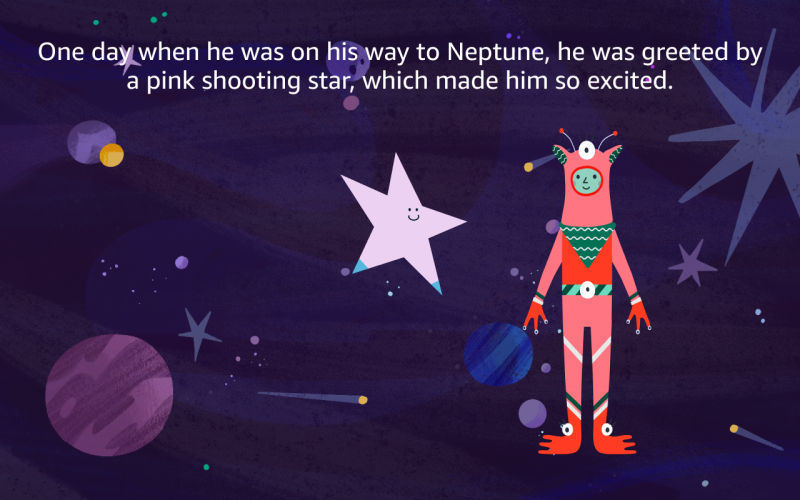 A scene from a story created using a space theme.

Alexa AI Head of Product Eshan Bhatnagar said his six-year-old son Reyaansh played a key role in helping develop and fine tune Create with Alexa. “He was one of our early and demanding beta testers,” he joked. “He’s helped us to uncover bugs and at the same time impatiently demanded more themes and characters to be introduced.”

Andy Thurai of Constellation Research Inc. said kids often put a lot of stress on parents, pressuring them to come up with new bedtime stories every night. It’s a major headache, because not everyone is gifted with the ability to come up with original and fun stories on the fly.

“This is where generative AI can take things to the next level,” Thurai said. “The ability of large language models to create tons of original content with minimal input, either written or oral, will make a genius out of parents by allowing them to create fresh stories each night in no time at all. It will make it possible to create stories at the speed of our thinking, and the content won’t be limited to just words, but extend to images, videos, text and other media.”

For Thurai, the real advantage of generative AI is that its stories can be personalized for each listener, with new versions based on the audience. He recalled how his own daughter cried for days upon learning that Bambi’s mother had been killed by a hunter, and said he had to get creative and change the Bambi story himself to nullify the impact.  With generative AI, that kind of situation can be avoided, he said.

“Imagine you feed a base story to generative AI and feed the listener’s persona to it,” Thurai explained. “The AI will create variations of stories, in multimedia content delivery, and each will have a different course and ending. Essentially scaling up while individualizing with original content for each user. That is the true power of AI.”

Another advantage of generative AI is that it can help the kids themselves to become creative artists, Thurai said. “If a child doesn’t like the version of the story that was told to them, they will be able to modify it to their liking,” he said. “So they can make Bambi’s mom become invincible or resurrect her from the dead, or karate chop the hunter. This can be done by Alexa simply listening to the needs of the child and customizing the story instantly to ensure they like it.”

Amazon is promising more to come. Bishop says Create with Alexa barely scratches the surface of what generative AI technology can do. According to her, Alexa’s voice recognition systems are constantly improving, along with its graphics, music and graphics generation capabilities. “Kids will want to be able to say, ‘I want to see a wall of chocolate’ and soon we expect we’ll be able to do that,” she said.

Create with Alexa is being made available in English on Amazon Echo Show devices in the U.S. starting today, with multiple free templates to get young storytellers started.